Curry is one of the most popular dishes in Japan, along with ramen noodles and sushi. Curry originated in India although it has been adapted and become popular around the world, including in England. It is said that the Japanese navy followed the example of the British fleet, where curry was originally eaten because it could be preserved for longer than ordinary stew. The Japanese soldiers brought the curry recipe back to their homes and it spread from there.

Yokosuka is known as Curry Town in Japan. 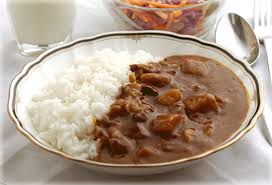